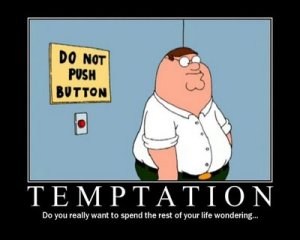 Acceptance of infidelity as a probable inevitability in committed, monogamous relationships is the most retarded relationshiptondom puppy-kicker.

Relationshiptondom is a big word.

Not abuse (I put the “not” in hood, don’t test me) and not unhappiness (have you seen my rainbows?)

You know why?  Because simply put, it’s utterly wasteful stoopiditay.

It means one of the relationshiptons has suddenly become too selfish and/or skurred to step up or step on.     Me no likey.  We can all be much better than that.

And nope, I haven’t ever cheated on anyone nor to my knowledge been cheated on.

I would honestly call my man in the process of undressing to call it off the temptation were somehow that serious.

Ain’t nothing in the world that could make a healthy person truly in a healthy relationship step out.  Those of you thinking of myriad exceptions are, well, unfaithful.  If not in practice, in waiting.  In theory if you will.

What happens, is folks let things slide within themselves or their relationship until they’re no longer really healthy but they’re too lazy/selfish/stinky to fix or end it.

Then, floating along in this drunken haze of retardationshiptonness, they meet the ultimate scapegoat: Temptation.

Temptation did this.  Temptation wore that.  Temptation is just so fine and sexy.  Temptation and I were just friends until that fateful night.  Did you see how Temptation descended from the clouds in the suit with a martini dangling from his belt and slid right in?

So much attention, when Temptation is a minor symptom of a real problem.  It provides a belittling distraction for something that’s usually a deeper-seated issue.

Who gives a flying walrus poot what happens after Temptation steps in?

Temptation, by definition is something you want.

One of my favorite leaders teaches, a person who is circumstantially faithful isn’t really faithful at all.  Because as soon as the situation is right, they’re with it.  True faithfulness can’t be broken or interfered with.

And yes, that is a cold hard line but it’s the cold hard truth.  Yes, Temptation is there.  Even for the faithful.

It’s food, substances, sleep, tv, etc.  But when we stop to realize that it is because we want it that it’s tempting then we also have to ask ourselves why we want it.

Now, if I suddenly found myself spending every waking moment unable to resist the drunken pull of every vile tasting liquor on the planet…  Or perhaps more appropriately, opting for Black Sambuca because it was in a beautiful glass and closer to me on the table than my preferred vodka martini… At some point I’d have to acknowledge I had a drinking problem and get into introspection mode to fix some thangs.

Which is the healthy response to the identification of an unhealthy behavior.

Our flaws surface to shine light on areas we need to grow in.

We can stubbornly and ignorantly deny the flaw or excuse the need for self-growth, but the truth just is.

Somehow, however, folks find every reason under the sun to excuse infidelity, to excuse themselves, blaming Temptation, their crazy partner, the pain, the hot oil, bananas and cream.  It ain’t them, it’s you.

Instead of pointing fingers, we ought to find every way under the sun to share ways to overcome it.  (Handy list coming in 5…)

To be clear,  if you can imagine scenarios where you would voluntarily succumb to Temptation you are part of the unfaithful crowd.  (…4…)Don’t be embarrassed. (…3…)  There’s plenty of you around for company.  (…2…)I’d say y’all should hold hands but hey.  Hey.  Easy now. Don’t tempt yourselves… (…1…)

How to make Temptation a thing of the past:

1)      Practice being faithful.  When I’m single it’s like I’ve turned into a hormone-filled thirteen year old on Viagra (inwardly anyway.)  Anything and everything man-like looks attractive and gives cause for daydreaming.  When I’m not, my relationship blinders stay on.  Yep.  Blinders.  Blinders are the single handiest tool for the faithful.  Simply avert thine eyes.   Conditioning is a powerful thing.  No Pavlov.

If you do that already, and still gots trouble…

2)      Be smart.  While I’m a firm believer in the idea that whatever we truly wish to happen will, I also have to admit some people are just a few skittles short of the rainbow sometimes.  I honestly can not think of a single scenario in which I would, sober and unthreatened, ever violate my relationship.  Know why?  ‘Cause at least ten steps before that scenario plays out I’m asking someone if they’ve lost their mind.  Then calling my man to laugh together about the hilariously idiotic exchange.  Be smart.

And if you think you’re being smart, but still know that won’t cut it…

3)      Don’t lie to yourself.  If for some reason, you really believe every man or woman in your friend roster is an innocent platonic relationship capable of withstanding all possible odds, you’se a dang lie.  I’m not saying cut anybody off but trust me, believing drunken cuddle sessions with your opposite-sex best friend are ok is a lie to yourself.  Get some boundaries for you and your uninvolved pal.  (Defining “platonic” vs. “uninvolved”: https://tinawatkins.wordpress.com/2010/07/28/the-color-of-friendship-part-i/)

Now, if you’re all blindered and smartened and boundaried up and still envisioning the many ways you’d stray…  Hey! Focus.

4)      Re-evaluate.  As true as it is that infidelity and Temptation have nothing to do with your partner, it’s also true that it is a symptom of illness.  Possibly in the relationship.  Maybe you’re not happy.  Maybe they’re not.  If it took reading this to look up and figure out it was time for a fix, perfect! Hop to it.  If it is truly as wonderful as you could ever dream, and you’re really being smart, blindered, and boundaried…  Well.

That underscores how badly you need to move onto the next step.

5)      Dig deep.  Yes, I’m going there.  If you can still imagine the very real circumstances where you would choose to step out, I’ve got news for you.  That is not normal.  That’s not just the way things are, the way most people are.  And I’m not passing judgment, just clarifying truth.

There’s something that has nothing to do with your behavior, your lifestyle, your friends, your relationship that makes you unfaithful… Wait.  Notice anything with my handy italics?

“You” showed up five times in that sentence.

Figure out where the root of your problem is and yank it.  Go back to youngin’ times.  It won’t be pretty.

(Whispering) being unfaithful is both unhealthy and a form of hyper-sexuality.  No bukkit.

If, when you were a tinier chitterling, there was melted ice cream, family dysfunction, sunshine-stealing, abandonment, kitten-napping, abuse, or (heaven forbid) a cake shortage, the effect can manifest in adulthood:

Feelings of self-hatred, grandma-tripping, inadequacy, puppy-tossing, and insecurity can all masquerade as hyper- sexuality and other unhealthy behaviors.  (Shudder)

And we all want to love ourselves second-most  (your LorT, whomever she may be should be first).  We all want to be healthy and happy and chase rainbows together.  And we can!

Please share, what has been your friend’s* experience with infidelity and either succumbing, being with someone who did, or overcoming it?  (*For anonymity’s sake.)

Please share your thoughts, encouragement, questions, I'd love to see them. Cancel reply

This site uses Akismet to reduce spam. Learn how your comment data is processed.